The four-year period of 2012-2015 was a time of high growth for community health centers across the United States. The implementation of the Affordable Care Act resulted in the expansion of Medicaid and increased patient demand, but also a need for health centers to effectively manage their operations by better understanding their financial and operational performance.

The report uncovered interesting findings across several financial and operational functions, including statistics related to growth and expansion, productivity and utilization, and financial measures. Most notably:

The analysis also looked at health center quartiles to examine strategies of high performers for replication, and areas of improvements for low-performers. The report was developed with support from the Health Resources and Services Administration. 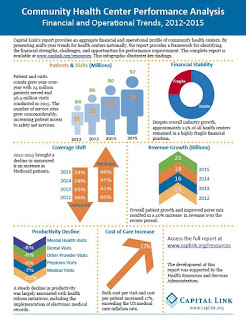 Sign up to receive our newsletter and email updates.